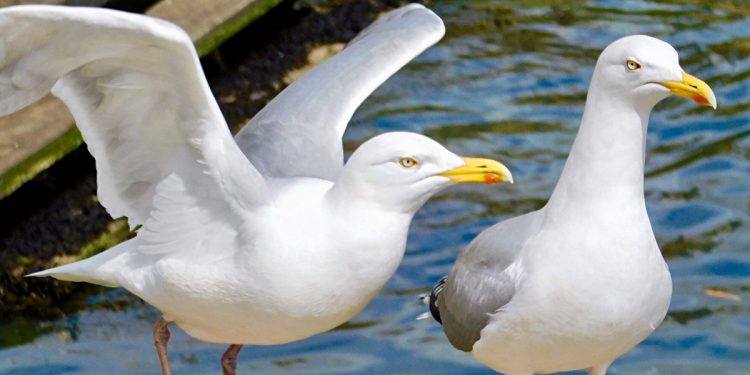 Residents have been urged to be on their guard after several stories have emerged of seagulls dive bombing local walkers for food.

In April last year the Echo reported that locals had noted seagulls becoming more aggressive – this was because of a lack of their usual and easily obtained food sources, such as discarded chips and takeaways because of the first lockdown.

Almost a year later, the Echo has again been contacted with a report of an aggressive herring gull swooping on a local resident who was on his daily exercise

Aled Jones, who lives near Bridlington Harbour, said: “It was scary walking along the North Beach seafront in Bridlington. There were several seagulls swooping very low – directly over my head, obviously looking for food. They continued to swoop low towards me for about 10 minutes, but eventually they gave up.

Aled continued: “My advice is to beware hungry seagulls at this time of the year, they seem to be increasingly aggressive due to lack of food.”

East Riding of Yorkshire Council told locals last year that: “Due to a lack of food sources, seagulls may be more hungry than normal and may behave aggressively.“

“Residents are asked not to eat on the seafront areas to encourage the birds to fend for themselves away from towns.”

Peter Rock, who is an expert on urban gulls and a research associate at the University of Bristol, said last year: “They are very, very resourceful.”

He added: “The large gulls know everything there is to know about everything within their home range. It behoves the sensible gull to know where to get food, exactly when, and how; where dustbins are being emptied into dustcarts, when black plastic bin bags are going out on to the street,”

In 2017 Scarborough Borough Council spent just over £36,000 contracting a company which targeted seafront areas where problems with the gulls had been reported.
The scheme also involved the removal of herring gulls and nests from buildings in town centre locations.

A specialist contractor was appointed to combat the ‘nuisance’ herring gulls after complaints about attacks on people.

Birds of prey, such as falcons, were used to disperse and discourage the gulls from certain areas in the North Yorkshire resort.