Brid fishermen to the rescue

Bridlington shell-fishermen and helpers have spent the weekend rescuing thousands of lobsters which were washed up on the beach between Fraisthorpe and Barmston after the storms of last week.

Hundreds of thousands of sea creatures, including crabs, clams, and starfish were washed up on the beach after the unprecedented stormy sea conditions. They were boxed up and taken to Bridlington Harbour where they were placed in holding tanks to help them recover.

Ben Woolford, who runs the Riptide and Eventide shellfish boats, based in Bridlington harbour, spent most of the weekend rescuing the lobsters.

Said Ben: “On the Saturday we collected around 20 big boxes, with about 15-20 fishermen helping with the rescue mission. On the Sunday we had around 30 fishermen and help form members of the public and managed to get well over sixty boxes full of lobster.”

Despite having very little sleep, Ben and his crew continued the operation through the weekend.

“I have never seen weather as bad as it was during the week. All the fleet was tied up and the crews were confined to the harbour – it was so dangerous.”

“After one of the crew alerted us to the amount of lobsters washed up at Fraisthorpe we went down and started the rescue. We collected lobsters from match-stick size upward. There was around 2000 kg in total, and of these only around 20 kg was overweight (allowed to be legally caught).

Despite the sleepless weekend for the shell-fishermen, many have gone back out to sea this morning (Monday), to return the lobsters to their grounds. they will also be checking their fishing gear, as many pots and markers were dislodged and washed ashore.”

Added Ben: “It may affect the stocks in the medium term, but I was chuffed to bits how fast they came round when they had chance to recuperate in the holding tanks.”

The following list are the boat skippers that helped with the rescue operation.

Members of the public for joining in and giving up their time.

See Santa around the villages

Memories of the ‘Big Brid Freeze’ a decade ago 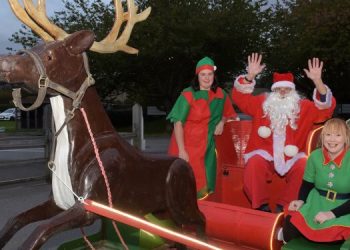 See Santa around the villages

Memories of the ‘Big Brid Freeze’ a decade ago