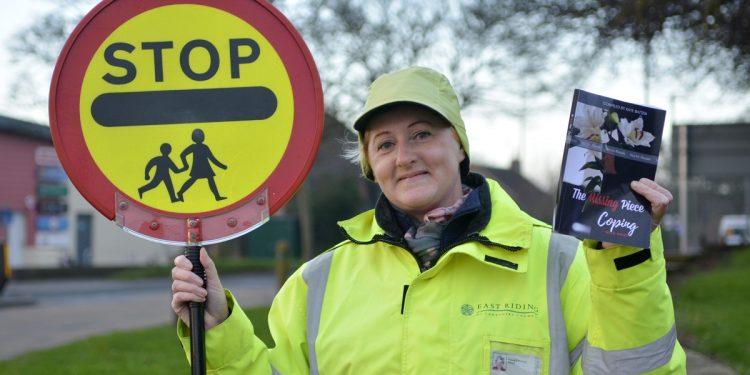 Writing down her feelings of how to cope with grief after her grandson sadly died has helped a Bridlington-based author to reach the top of the Amazon best seller charts.

Kate Batten wrote a journal for fifteen days after the loss of her grandson as a way of coping with her grief. She then had an idea to turn the pages of her work into a book and get others to share their stories with tips on how to get through the grieving process.

Her book, entitled The Missing Piece – Coping With Grief, shares how Kate managed her grief and she hope it will help others ‘to see a ray of light even in their darkest days.’

Kate is a familiar face in Bridlington where she works at the school crossing patrol on Scarborough Road roundabout as a ‘Lollipop Lady’ during term time.

She also set up the highly successful Fugitive Mums group who met informally at the Attic Cafe on Prospect Street (before lockdown) to discuss bereavement and help those that were encountering loneliness.

“I think by staying focused on this project it helped so much with my own grief. The project attracted the attention as far as Hollywood and Canada. A Hollywood actress called Eileen Grubba added her story to the book too, Eileen has starred in many famous TV shows like Dexter, Bones, The Politician which is on Netflix and many more. I was amazed with the support and how far it reached.”

The book contains fifteen separate stories that deal with all aspects of grieving, including losing a pet, parents, children and other family members. She had the idea whilst training to be a special needs childminder.

The project attracted international support and the official launch of the book was on November 25th last year.

Within days Kate’s book had shot up the Amazon Bestsellers list in both Canada and America and she is hoping the UK market will follow the same path of success.

Said Kate: “I didn’t want book of misery, but different views on how too help people through the dark days of losing someone or something they love dearly. I was collecting stories form various people and it was going very well until the pandemic hit and that slowed everything down.”

Her own chapter in the book is fifteen pages long and describes her feelings and emotions of losing her grandson – David – who died during birth at 27 weeks.

Kate is also studying for a degree in Criminology with the Open University.
The UK Amazon book link is for The Missing Piece – Coping with Grief by Kate Batten is: https://tinyurl.com/y52e3rw5