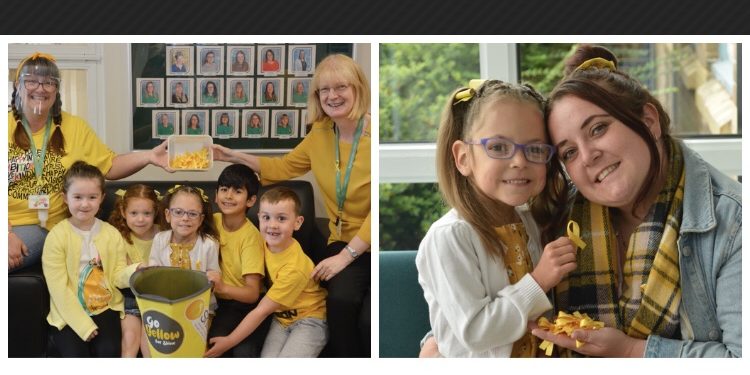 Youngsters from Burlington Infants School in Bridlington have raised over £270 by organising a Go Yellow Day for the charity Shine UK which has helped one of their classmates over the past year.

Olivia Sharp, who is in year one at the school, suffers from a condition called hydrocephalus (a lifelong condition that requires brain surgery and also a shunt placed in her head to drain excess fluid), and spent the first five months of her life in hospital.

Mum Chloe Lyall was delighted that the school had offered to hold the fundraiser to raise awareness of the relatively unknown condition.

“The school have been fantastic, and Olivia receives academic support and some one-to-one sessions with a specially designated classroom assistant.” Chloe explained.
Olivia, now aged six, was born at 26 weeks and kept at the Special Care Baby Unit in Hull Royal and then was transferred to Leeds General Infirmary when her condition worsened after one of her brain ventricles ruptured.

“Despite her condition Olivia likes to be very independent and she scares me sometimes by getting into mischief that any healthy six-year-old would normally do. She tries to do everything and is getting on really well at gymnastics where she is performing superbly. She is idolised by her big brother Ethan, eight, and she loves her little brother – one-year old Ronan so much.”

“Olivia struggles academically, as her condition has similar traits to autism, but she never lets her condition get her down and she has lots of friends who help her at school.” Added Chloe who lives with her partner Nathan Sharp.

Olivia and her family who live on Nostell Way in Bridlington, have been supported by the Shine charity for the past few years and have provided help, advice and also handed leaflets out to the school to raise awareness.

Burlington Infants headteacher Mrs Louise Booth said: “We are so happy to be taking part in this Go Yellow Day. We have been thinking about friendship in school and this is such a lovely way to raise awareness of Olivia’s condition and support Shine UK – the charity which helps her and her family. “
“The children and staff have all worn something yellow to school and Olivia’s mum made yellow ribbons for us all to wear.” added Mrs Booth.

For further information on Shine UK which is a registered charity providing information and advice about spina bifida and hydrocephalus to individuals, families and carers: www.shinetrust.org.uk.