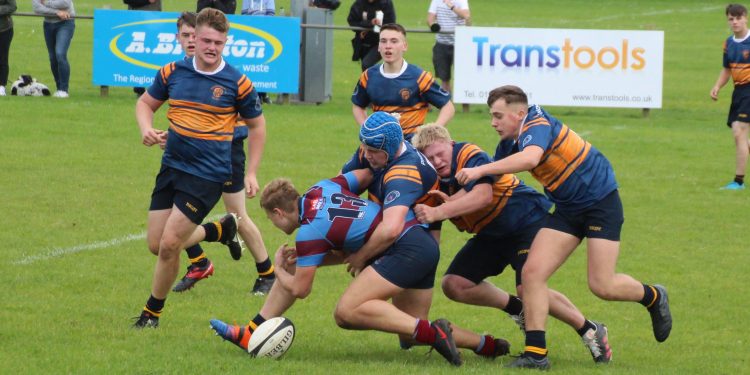 Patrick Philpot at the centre of the action for Bridlington during their defeat to Rotherham at Dukes Park on Sunday. Pictures: Andy Kempton.

Bridlington went down 36-7 at home to Rotherham Phoenix in the first round of the U17s Cup.
The strong visiting side from South Yorkshire were always in control and Bridlington had only a second half try from Fraiser Morrison to show for their efforts.
Defeat means Bridlington will now compete in the Plate competition and travel to Bradford Bees in the first round on November 21.
Before then, Bridlington will be hoping to post their depleted ranks.
A club spokesman said: “We are desperately looking to bolster the side, as we start our league campaign on Sunday.
“If you would like to join the team, please get in contact with the club, 01262 676405, or email bridrugby@hotmail.com. Alternatively come along to our training sessions on Thursday evenings, 7pm.”
Sunday’s match saw the two sides test each other out for the first quarter of an hour, with both having good periods of possession.
Rotherham eventually got a good foothold on the game when their openside flanker managed to cross the line for the opening try, which was converted by the scrum half.
Bridlington made mistakes, which gave another quick try to the visitors when their second row found a gap to score.
The two sides remained even for the remainder of the first half, despite some good running lines by the home side, who were unlucky not have scored a try or two.
The second half was one-sided with Rotherham keeping possession for long periods, running in three unanswered tries.
Bridlington kept their heads, winning more and more ball, but still unable to break free from the Rotherham defence. That was until 10 minutes before the end of the game when good handling and a clean break through the defence by Fraiser Morrison saw him in space and he weaved his way to a well deserved try. Archie Thompson kicked the conversion.
Rotherham had the last say shortly before the final whistle, when the replacement prop found himself on the score sheet, with a converted try to end the encounter.