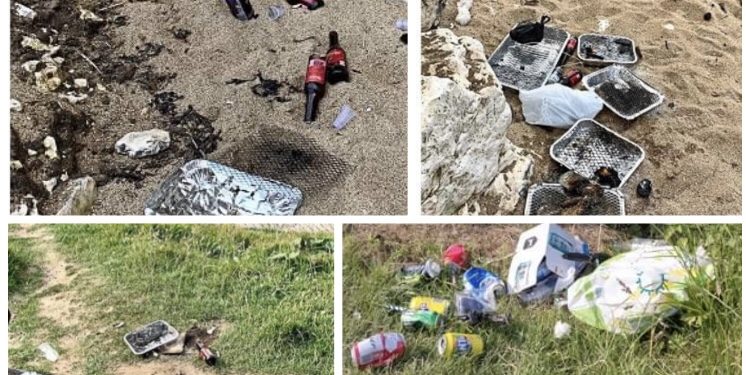 Beaches around Bridlington and Flamborough have been left looking ‘absolutely horrendous’ after huge amounts of litter was disgarded on the beaches and surroundings areas.

Particularly badly hit was the beauty spot of North Landing at Flamborough, which saw a huge influx of visitors over the weekend.

So upset was Graham, he referenced the BBC Countryfile show which broadcast on Sunday evening showing the beautiful coastline and wildlife around Flamborough Bempton.

“Shame Countryfile couldn’t have filmed this, so that more people can see what a growing proportion of the population are doing to the local beauty spots. Worse than animals.” added Graham.

On Sunday morning the Editor of the Echo visited North Landing.

“Although it was early, the beach was busy and I did my usual litter pick, filling up a carrier bag with general rubbish, broken beer bottles, and the usual discarded items that people can’t be bothered to put in a bin”

“To see these images that Graham sent in from Sunday evening is both annoying and depressing…. locals and visitors to the area mostly respect the environment and take any litter to the nearest bin or back home – but a small minority don’t bother.”

Several people also commented on the disgusting state of the North and South beaches of Bridlington. One volunteers collected four bin bags full of rubbish on Sunday evening after seeing rubbish strewn about the North Beach.

What do you think can be done to stop littering on our beautiful beaches…? Let the Echo know in comments or email editor@bridlingtonecho.co.uk.