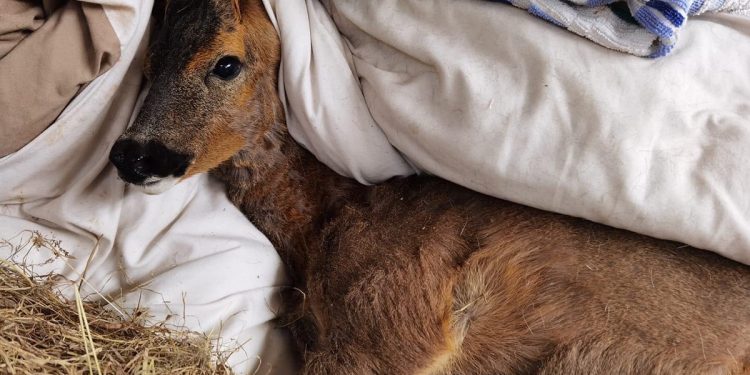 The young male roe buck deer that became trapped in a fence early yesterday morning (Friday 14th May) is being rehabilitated at the Whitby Wildlife Centre after a dramatic rescue.

Bridlington Poilce have also put out an appeal to dog owners to be alert and on the look out for wildlife such as deer that may have ventured into populated areas. They urged owners to keep dogs on a lead whilst walking around the town, especially in the Queensgate area and in and around Dukes Park where the incident took place.

Local builder Simon Lee Waldram and his friend Ben Cawthorn were one of the first on the scene when they spotted the distressed deer thrashing about after getting stuck in a fence near the rugby pitches on Dukes Park.

Simon spoke exclusively to the Echo and outlined how he and Ben had come to the rescue of the trapped deer early yesterday morning.

After working quickly as a team to release the helpless animal he soon calmed down, but we were aware of how stressed deers become when they are in contact with humans.

“We eventually got him untangled from the fence and he appeared concussed and dazed – so we laid him down and covered his head with towel and he calmed and then relaxed a little.” said Simon.

The juvenile deer was understood to be escaping from an off-lead dog or dogs which were thought have chased the young animal over the rugby pitches on Queensgate.

“He was only a tiny young deer, probably only a few weeks old. There was a bit of blood from the nose and antlers. Hopefully he should make a full recovery.” added Simon.

Two of the young deer were photographed on Queensgate earlier this week. The smaller roe-buck on the left is thought to be deer that was rescued. It is thought they may have walked down the railway tracks overnight from Bempton area which is home to several groups of deer.

A spokesperson from Whitby Wildlife Sanctuary, who came down to Bridlington to rescue the deer, said: “He is currently in a bad state of shock and unable to see (this is standard for deer when in shock initially).”

“He has wounds to his antlers too. We’ve given him pain relief and he has herbivore recovery. Really hope to see him on his feet tomorrow.”

The deer is expected to remain at the sanctuary for the next couple of weeks receiving rehabilitation care.

If you would like to help the wonderful work that Whitby Wildlife Sanctuary undertake, as they are solely funded by public donations you can donate online or by cheque.