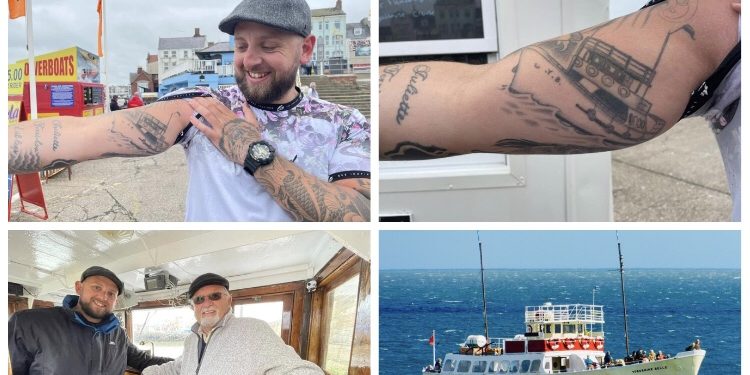 A visitor to Bridlington enjoyed his trips on an iconic pleasure cruiser so much, he has had a tattoo of the boat inked on his arm.

A spokesman for the Yorkshire Belle – affectionately named ‘the grand old lady of Bridlington Harbour’ which has been a tourist mainstay of the town for decades, takes up the story.

“A few weeks ago two men called Danny and Peter arrived our ticket office for a cruise. Danny more or less started the conversation with “I have a tattoo of your boat!”

“Obviously curious, but with no small amount of caution we asked “can we see it?”
“After talking some more both before and after the cruise, we had learnt that Danny had brought Peter, his grandad, to Bridlington from the Isle of Wight.

“Peter grew up in Hull and wanted to revisit the area again so made the long trip up. In particular he wanted to sail on the Yorkshire Belle which he had done many times as a child, but hadn’t been aboard for around 70 years.

“Moments like this, hearing what ‘Belle’ means to other people, they really make it all worthwhile….thanks Danny and Peter, we hope to see again.”