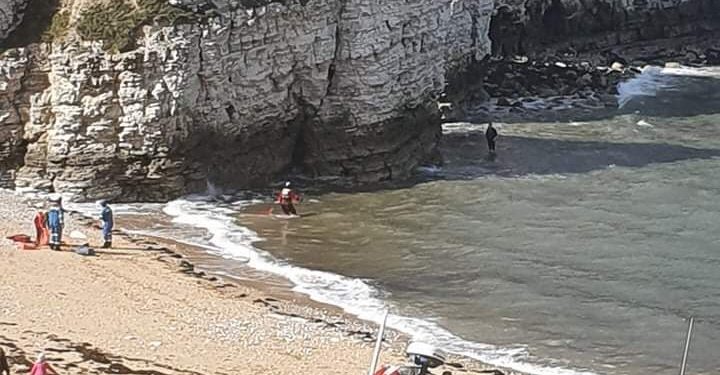 Share on FacebookShare on Twitter
Video Exclusive. Watch the dramatic moment at Flamborough North Landing as Coastguard rescue people cut off by the tide. Updated. This is the official statement from Bridlington Coastguard Rescue Team.  While undertaking a local area safety patrol the team were tasked by colleagues at Humber Coastguard as they had received a call indicating that 3 persons were cut off by the tide at North Landing, Flamborough. On arrival one casualty was visual approximately 15m from the shore at a location known as ‘Horse Hole’. The Coastguard Officer In Charge decided to conduct a water rescue as the location of the casualties would not have allowed for a lifeboat extraction. As the casualty was in a safe position and with no immediate threat to life, 2 Coastguard Rescue Officers donned drysuits and life jackets and entered the water. Using a rescue technique know as Tethered Rescue they waded out to the casualty and took along extra life jackets for the casualties. When they reached the casualty two others were visual accounting for all 3 casualties. Two casualties were assisted to safety by wading through the water back to the shore but the 3rd casualty became anxious so the rescue officers decided the best course of action would be to support the casualty and the shore crew pull on the tethered ropes and pull the rescuers and casualty to shore. All 3 casualties safely extracted from the rocks and following an assessment by Yorkshire Ambulance Service Paramedics they were allowed to proceed with their day in Flamborough. Coastguard Rescue Officers are trained in Water Rescue Techniques allowing them to enter the water to effect rescues as necessary. Always check the tide times when visiting the coast and ensure you have enough time to leave the area when exploring  This was the scene this afternoon at Flamborough North Landing after three people were rescued by the Coastguard after becoming cut off by the rapidly rising tide As always, please check the tide times when venturing on to the rocks.u Thanks to Hannah at the Boathouse Burger and Grill for the video.
Tags: coastguardEast RidingFlamboroughrescueseaYorkshire