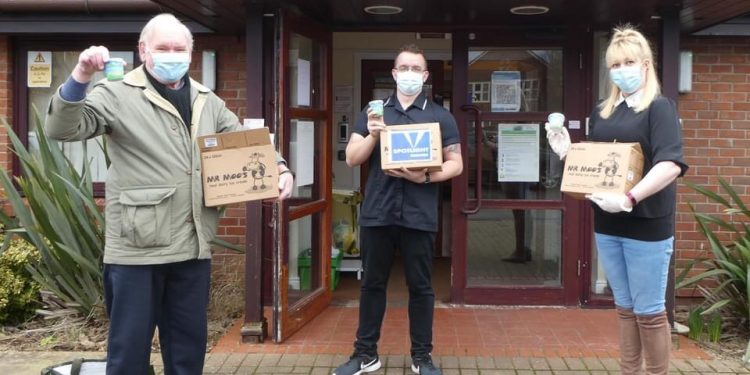 A Bridlington theatre has kindly stepped in to bring down lockdown cheer to young and old alike.

The Spotlight Theatre, which is a community organisation based in West Street in Bridlington, has donated hundreds of ice creams to residential homes and also schools around the town as a gesture of goodwill.
Mike Sheldon, who is the Chairman at Spotlight, said:
“Unfortunately, like many others, Spotlight still remains closed. Mr Moo’s are our ice cream maker and stockists, but due to them not open at the minute they’ve kindly donated some ice creams to local care homes and schools.”

“It’s nice to put smiles (and ice-cream) onto people’s faces.” continued Mike. “We have visited several care and residential homes in Bridlington and donated some Mr. Moo’s treats which we would normally be selling in the theatre. Every little helps during these testing times.”

A spokesman from Mr Moo’s said: “We thought this was a great idea, so we will be donating some more 120ml tubs to Spotlight and they will be dropping them off to places of their choice because the first batch I went down so well.”
So far volunteers have visited and donated to the following:

So far over 700 tubs of ice cream have been delivered by Spotlight volunteers with a few hundred more to go.

The Spotlight Theatre have also launched a Buy-a-Brick appeal.
Plans are being made to extend the theatre by acquiring part of the garage premises next door, with the much-needed extra space being used to relocate the cramped workshop and provided much-needed storage.
Estimated costs to build a dividing wall and other works is estimated at £12,000 and theatre members hope to raise the money by launching a ‘Buy-a-Brick Appeal.’
Chairman of the theatre Mike Sheldon, said: “Spotlight plays a vital role in providing amateur theatre for all. Bridlington Amateur Operatic and Dramatic Society (BOADS) purchased an empty building in West Street in 1999, and through sheer hard work and determination by its volunteers, they transformed it into an incredible, fully equipped bijou theatre.”
Mike continued; “It is an amazing and incredible place of entertainment and loved by its members and supporters.They say “the show will go on” and without doubt after we are free from Covid-19, we will all return to enjoy Spotlight once again.”
A total of 1200 bricks are for sale at £10 each and for every brick purchased the buyers name will be entered into a draw where three lucky winners will be special guests for:
• A show of their choice • A theatre tour and meet the cast before the show • A free drink and ice cream
Spotlight produces affordable, spectacular shows and plays throughout the year and has a loyal following from the residents of Bridlington and beyond. It has also welcomed touring shows, provides theatre tuition to all ages, and streams live and recorded events from all over the world.
The theatre also provides a highly acclaimed free dementia friendly film on the first Monday of every month.
To donate: Click below to access the pageJUST GIVING LINKhttps://www.justgiving.com/campaign/Spotlight
Donation forms are available through their website – www. spotlighttheatrebrid.co.uk – or on Facebook or contact manda.spotlight@hotmail.com. Registered Charity No. 231760.