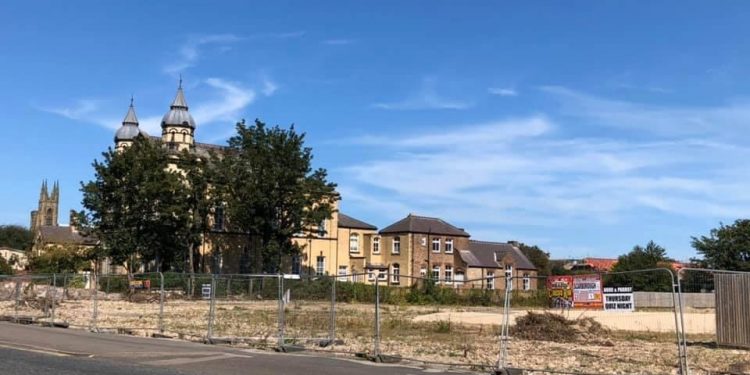 Aldi has submitted further revised plans for its proposed new store in Bridlington, leading to hopes that work on the building could start soon.

The supermarket chain already has one branch in the town in Bessingby Road, but was granted permission to build a new store at the former Jewson site in St John Street in the summer of 2015.

Since then, very little progress has been made, but a revised planning application has now been submitted to East Riding of Yorkshire Council.

The changes are minor, but include adding an external lobby and charging points for electric vehicles and removing some of the false windows included in the original design.

Six years ago Aldi had announced plans to build the second supermarket in the town on land between St John’s Burlington Church and Kwik Fit… back in July 2015.

After demolition of vacant buildings – which were formerly occupied by Jewson Builders Merchants – the site has remained undeveloped and fenced off.

Work on the site looked set to commence in August 2019 with the appearance of a mechanical digger and other construction equipment.

In June 2020 a statement from a communications consultancy, working on behalf of Aldi, stated on the ERYC Planning website: ‘In 2015 Aldi Stores Ltd received planning permission to construct a brand-new food store on St John Street, Bridlington. Also initiated was some of the development work, such as demolishing buildings and remediation of the site during 2018.’

‘Following a review of the current application, Aldi Stores Ltd has decided to submit an application to vary the conditions of the planning consent for a new food store in Bridlington.’