Love through the looking glass…. 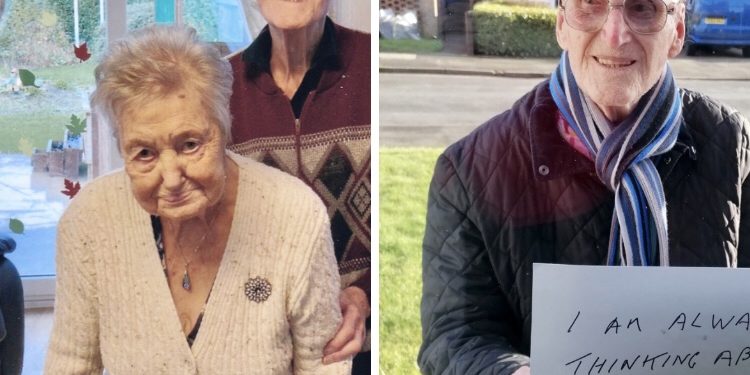 A story of true love during the pandemic

A couple from Bridlington celebrated their 70th wedding anniversary last month…in the most unusual and romantic way.

Peter and Dorothy Taylor, both 92, celebrated the milestone platinum anniversary on 24th February, having married on that date at Bridlington Register Office – which was then located on High Street in the town.

As Dorothy is now a resident at Rosegarth Residential home in the town, Peter had to visit her at a social distance during the current restrictions.

To declare his love and affection for Dorothy, Peter hit upon the idea of writing his romantic thoughts on signs as the couple found it difficult to hear each other through the windows.

And Dorothy was delighted with the gesture, blowing kisses and giving the thumbs up back to the forever romantic Peter.

Peter, who was born and brought up on Lawson Road in Bridlington and has lived in the town all his life, met Dorothy – who is originally from Hull – whilst she was working as a waitress in the town for the busy summer season.

Said Peter: “It was love at first sight…I kept visiting the cafe she was working in and Dorothy soon got the hint that I was in love with her. She accepted my proposal and stayed in Bridlington.”

Peter, who worked as joiner helping to build many houses and in the town, is well known in horticultural circles, winning hundreds of prizes at shows around Yorkshire for his chrysanthemums, roses, and vegetables.

He is also a keen photographer, and passed an A’ Level in the subject when he was 61.

Dorothy, who worked at the former Snaps Photographers (which was based next to Garrison Square on the Harbour top) also looked after the children as the family grew up on West Hill.

Peter, when asked what had kept the couple happily married for so long, replied: “To compromise and see each other’s point of view. And of course always keeping the romance alive.”