Poignant moment as Flamborough Coble Disaster of 1909 is remembered. 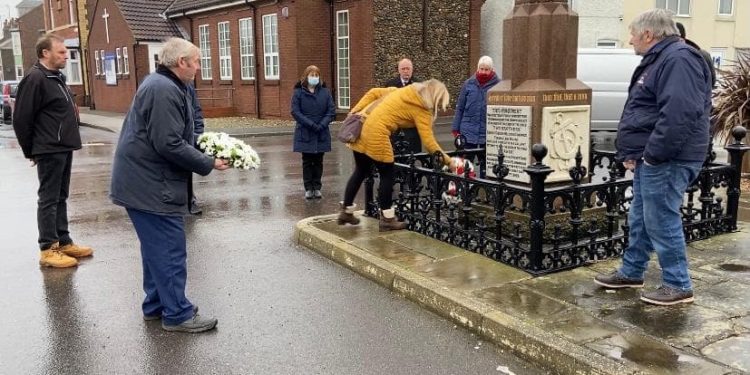 A small, but poignant ceremony took place today (February 5th) to commemorate a tragedy that devastated the small fishing community of Flamborough 112 years ago.

A wreath laying ceremony took place at the Flamborough village monument this morning to commemorate the disaster, one hundred and twelve years to the day.

Two Flamborough cobles were lost and six fishermen drowned within sight of safety when the Gleaner (H 1001) and the Two Brothers (H 919) were overwhelmed by huge seas on Friday the 5th February 1909.

Paul L. Arro takes up the story of self sacrifice that shook the coastal village of Flamborough, East Yorkshire.

Even though the off-shore men who worked to east’ard had not gone to sea that day as the weather was poor, 40 or 50 fishermen who worked the inshore grounds had put off in their sailing cobles. The conditions were deemed to be alright for them, a strong breeze from the south west, but if the weather came on they would be nearer home and could run for the haven. By 8.00am the south westerly wind had veered round to north and a full storm developed.

The gale whipped the sea up into a frenzy and white topped waves threatened the whole fleet.

The cobles began to run for the North Sea Haven and the crews were doing their very best to get to the shore in the difficult conditions. One of them, Gleaner, was just off the West Scar and almost safely home when she was struck by a big sea which knocked her completely down. Sea after sea struck the coble and she was overwhelmed, her crew of John Cross and his two sons Robert and Richard were thrown into the raging water.

The No1 Station lifeboat Forester had been launched and although double manned, twenty men pulling on the oars instead of the usual ten, she could not get more than fifty yards from the beach.

The coble Two Brothers which had also been running for the haven and slightly astern of Gleaner, with crew Melchior Chadwick, Tom Leng Major and George Gibbon aboard, had seen what had happened. With no hesitation they ran up alongside and the three men in the water were grabbed with great difficulty by the crew of the Two Brothers, each man clicking hold of one of those floundering and pulling them into the coble.

Fishermen on the shore who had witnessed the event unfold feared the Two Brothers could not survive, she was in the midst of that boiling, raging sea. In an instance of getting the three fishermen aboard, a huge sea came up and hit the Two Brothers turning her head into the cliff. Another gigantic sea then rose and totally swamped the coble. All six men were thrown into the water and struggling in the merciless sea, in a very short time they had disappeared beneath the tumultuous waves.

Robert Knaggs who had been in the coble Felicity (H 977) that morning and who had got ashore earlier, said that the Two Brothers and her crew would have landed safely if they had not gone to the aid of the Gleaner. As soon as they saw the coble in distress they went to her without any hesitation whatsoever.

At the inquest on the four fishermen whose bodies had been recovered, William Major, father of Tom Leng Major, in evidence said the gale came on with startling suddenness, the sea rising mountain high. He had never beheld such a sight in his life and feared for the inshore men.

The funerals of four of the six drowned fishermen were held on Monday the 8th February 1909, the coffins of George Gibbon (34), Tom Leng Major (18), John Cross (44) and Richard Major Cross (17) were carried to the local Parish Church of St Oswald by local fishermen. The body of Melchior Gibbon (37) was recovered from the sea near King and

Queen Rocks on Tuesday the 16th March 1909 just over five weeks later. Identical headstones were erected in the local cemetery to mark each grave of the five fishermen. The body of Robert Cross, aged 19, was never recovered.

That fateful day had been described as one of the saddest days in the history of the village.

A monument was erected in Chapel Street, Flamborough in recognition of the heroism and bravery of the crew of the Two Broters and was paid for by public subscriptions.

This monument was unveiled on Thursday the 19th August 1909 by the Mayoress of Bridlington Mrs C G Southcott, who had inaugurated the fund for its erection. Together with the six names of the fishermen who perished that day is the inscription ‘Greater love hath no man than this that a man lay down his life for his friends’.

It is interesting to note that one member of the Flamborough Lifeboat crew that fateful day vowed to devote the remainder of his life to the saving of life at sea. His name was Robert Cross, brother and uncle of the ill fated crew of the coble Gleaner. He served with distinction as Coxswain of the Humber Lifeboat for 31 years and became one of the most outstanding and decorated lifeboat coxswains of the Second World War. During his service with the Royal National Lifeboat Institution at Spurn Point, he won the George Medal and was awarded two Gold Medals, three Silver Medals and two Bronze Medals by the Institution.