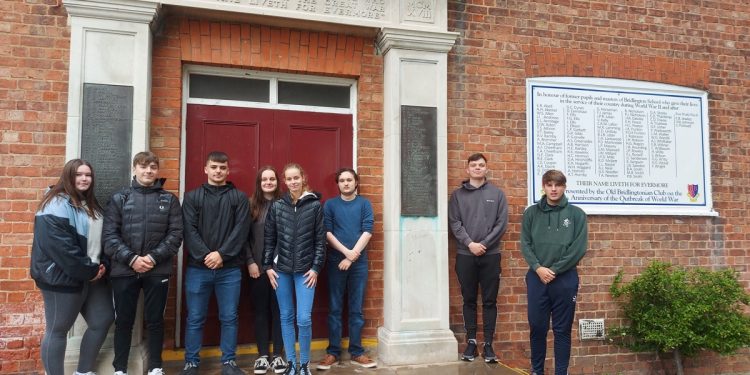 A group of Year 12 students from Bridlington School Sixth Form have completed a special project for their Gold Duke of Edinburgh Award.

The youngsters decided that they wanted to tidy up the area outside Bridlington School Gym, which is the Memorial Garden to all the past-students lost in World Wars One, Two and many other conflicts around the World.

“The School has always had a military connection, with its Officer Training Corps (OTC) being formed in 1908 and later forming the School’s Combined Cadet Force, which still has cadets parading today from the Army and Royal Air Force sections.” said Sarah Green who is a teacher at the school and also runs the schools cadet unit.

“So far, the Year 12 students have been removing weeds, re-planting shrubs and flowers, and cleaning the bronze War Memorial boards – which name all those servicemen lost.” she continued.

“They would really like to return the War Memorial Garden into a nice area of Remembrance, that is befitting of their sacrifice.” added Sarah.

Any local business or groups who would like to contribute to this worthy project, please contact Mrs Green, the Duke of Edinburgh Award Manager at the School: (greens@bridlingtonschool.org.uk).