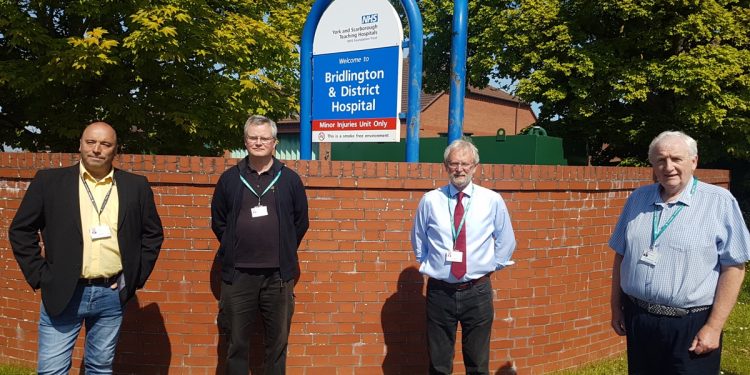 A group of Bridlington town councillors claim the Trust that’s runs the town’s hospital is destroying it ‘Brick by Brick.’

Hidden proposals in the current “consultation” from York and Scarborough Hospital Trust and East Riding Clinical Commissioning Group will destroy hospital services according to Bridlington Councillors Heslop-Mullens, Walker, Norman and Dealtry, who have issued a joint press release to alert Bridlington residents of the plans.

Sources who were at a Staff Briefing Session on Wednesday, 19th May, stated that during the meeting with Bridlington Staff, Simon Morritt Chief Executive of York and Scarborough Hospital Trust he had said,: “What we are NOT doing is having a consultation. So, we are NOT consulting with the local population or partner organisations on options”.

“Whilst we welcome open and transparent consultation with all our residents, this sham “consultation” is far from it. It is a Marketing Tool to mislead people into accepting the loss of their hospital services.

“Hidden amongst a few good ideas in the glossy document are proposals which will affect the quality of life of every resident which they are being asked to approve without full knowledge and involvement.

“We, like all residents, understand that some health procedures have to be undertaken centrally but not everything. We’ve had promises made and broken, already lost so many of our local services along with loyal staff being moved to Scarborough. All at the cost of removing vital hospital health services from Bridlington.

“So, what is in line for Bridlington Hospital? They want to use wards emptied by the Trust for GP surgeries and other services so that there will be no space left to reinstate secondary care like local consultant-led clinics.

“We know that well-hidden details behind this plan will ruthlessly and irreversibly degrade our hospital. It is an administration cost saving exercise instead of meeting the needs of residents with essential local services.” the councillors added.

Jean Wormwell, who is Chair of Bridlington Health Forum said “I welcome the involvement of this cross -party group of Councillors”. This consultation claims that positive discussions have been held with Councillors and Bridlington Health Forum. Our recollection is that we have challenged their plans and begged them to properly involve our residents. Our concerns and suggestions have been heard but not listened to, and these hidden cuts and sell-offs are being railroaded through. Please don’t be fooled, York Trust is abandoning Bridlington.”

The cross party statement continues: “We ask residents to complete the survey but to use the boxes in Sections 1 and 2 to reject the plan and call for open, honest and meaningful consultation with the full population.

“Our hospital has never been under greater threat and is being dismantled, brick-by-brick, service-cut by service-cut, surgical-case-by-surgical-case. If we do not fight now, it will be gone. Reject the plan.”

The “consultation” which is available in paper form by phoning 01482 672156 or at: https://www.smartsurvey.co.uk/s/HealthyBridlington2021/

The Councillors said they will be issuing an alternative survey in due course.