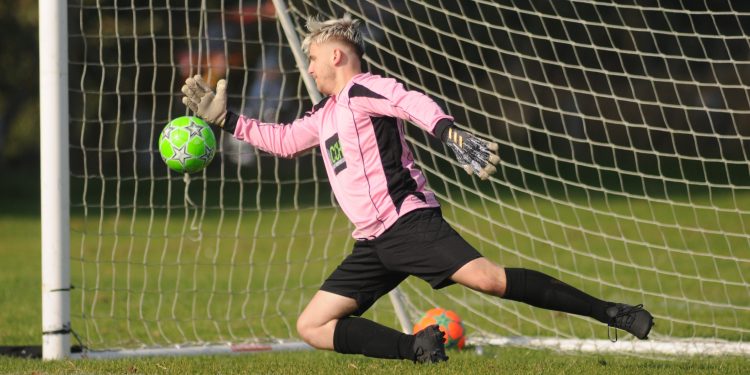 GOAT goalkeeper Craig Male is beaten by an effort from East Yorkshire United, during his team's 14-0 defeat. That was nothing compared to the 24 goals hammered past Easington United Fourths by Flamborough Pictures: Dom Taylor.

Records tumbled as Flamborough enjoyed a goal-fest in Division Seven of the East Riding County League on Saturday.
The former Scarborough League side romped to an incredible 24-2 win at Easington United Fourths, with Josh Wood leading the way with an eight-goal haul.
Ross Pearson added another five and James Hodgson netted a treble. Jason Coultas and Mitch Collins got doubles with Jack Almond, Will Hodgson, Louis Leddy and Cal Charlton also on the scoresheet in the club record win. Matty Keyworth did not score but did pick up the man of the match award for the league leaders.
Boro are ahead of East Yorkshire United on goal difference, after they rattled up a 14-0 win at beleagured GOAT.
In the same division, Bridlington Rovers Academy drew 2-2 at Wareham Forest, where Ashton Dowson scored twice for the visitors.

In the Premier Division, Brid Sports Club were 4-2 victors at South Cave United Reserves but Telegraph went down 4-1 at leaders North Cave.
Brid Rovers lost 4-0 at home to North Ferriby Development in Division One, but there was a 7-1 success for Brid Spa against Pocklington Town Fourths in Division Three. Craig Webb struck a hat-trick with Tom Coates, Ashley Armatage, Matthew Faulkner and an opponent registering their strikes.
George Jewitt-Knott, Austen Wiles and Sam Johnson got leaders Bridlington Millau’s goals in their 3-1 win over AFC Fiveways in Division Four but one goal was enough to condemn Club de Albion to defeat at Northside Sporting in Division Six.
In the Humber Premier League, Bridlington Town Rovers lost their Division One match at Blackburn Athletic 4-2.

In Division One of the Scarborough League, James Pinder notched a hat-trick in leaders Filey Town’s 9-1 win at Scalby. They had led only 2-1 at the break.
Filey Reserves went down 5-1 at Newlands Park Hotel in Division Two.