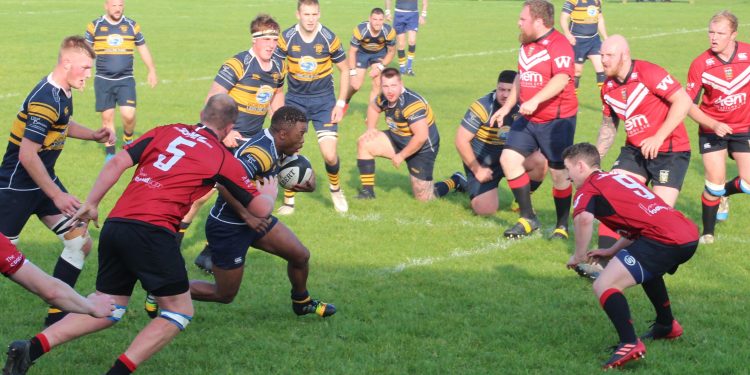 Bridlington fell to a 27-10 defeat at home to Pontefract in their replayed Yorkshire One match, reports Andy Kempton.
The original staging was abandoned due to an injury, with Bridlington leading 8-0 after about 15 minutes.
The hosts had seven players unavailable from the previous week, due to injuries, holidays and work commitments but an appeal with RFU North, for the game to be moved to another weekend, was rejected.
Frankie Gascoigne and Tom Benninger returned from the injury list, Harry Cowell made himself available along with former first-team players Ali Sutton and Sizwe Zondo, who had no played for some time. New signing Viliami Fangupo, who was still suffering from jet lag, made up the team.
The game started well for the home side, attacking from the kick off, they moved forward, edging their way up the park. A long pass by Matiu Welch, found Regan Stirk who drew the defence before giving Josh Stanyon a gap to get through for the opening try. Sam Wragg was able to kick the conversion to give his side a seven-point lead.

The home side defended well for a while, but the dominant pack of the Pontefract side dragged in the Bridlington defence, giving centre Andy Coleman the space he needed to score a try. Scrum half Callum Watts added the extra points, bringing the scores level.
Bridlington increased the lead with a penalty from Wragg when the Pontefract prop was yellow carded.
The visitors retook the lead just before half-time with a try for winger Ciaran Tucker.
Just after the start of the second half, Bridlington lost Frankie Gascoigne to the growing injury list. They held out for a short while, until Pontefract’s replacement prop Andy Fenton scored a try.

Joe Fell was next to join the ever increasing injury list, as Bridlington began to come back into the game.
Tempers began to rise, culminating in the referee yellow carding a player from each side. The hosts were still holding their own in the game, despite being down on the scoreboard but following an indiscretion of the laws, Pontefract were given an opportunity to increase the score with a penalty kick, which they duly took.
Another yellow card was shown to a Bridlington player, giving the visitors a power play for 10 minutes and it did not take them long to increase the score with a try by centre Harry McCalister, this time Watts converted for the last points of the game.
Bridlington now prepare for the long journey to Huddersfield YMCA, who sit middle of the table three points and three places better off than Bridlington.