Book launched to celebrate a century of Bridlington Town football 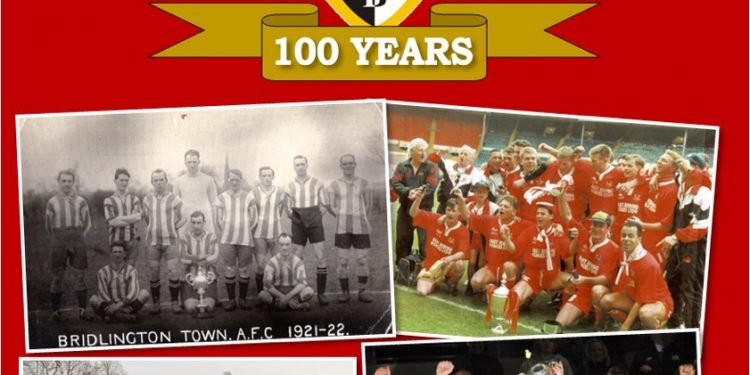 A book to commemorate a century of football played under the name of Bridlington Town FC has been completed and is ready to go to print.

The idea for the book came in late 2019 after the club chairman Pete Smurthwaite made the announcement that plans were to be drawn up for a new clubhouse.

Alan Armitage, one of the books researchers, said: “It was felt that a project of this kind should be recorded for the future. It was realised that the building of it in 2020 would co-incide with the centenary year of football in the town under the name of Bridlington Town FC. It was then suggested to incorporate the two events into one book. So, the year long project took off.”

“Research and investigations were carried out for the 100+ years of history and records to produce an book to show what a local club can achieve.”

“It’s for the sporting enjoyment of local people and others, and to preserve it on record for the future towns people to see the history of it.” continued Alan

“Making this book has been an interesting, educational, and sometimes a demanding project. The original idea was to produce a match day program sized booklet, but as time went on it was obvious that a lot more space would be required to do it justice. It has literally grown to more than three times the size.”

The book now has 156 pages and over 150 photographs, with comments from managers, staff, players and officials – both past and present.

“As it progressed more people became involved in supplying information and pictures to which our thanks go to them for being so helpful.  Also, it has been quite humbling how many people with links and memories from the past to the present have such an affection for the club to offer to say so in writing a dedication of their time here. We thank them all.”

Helping with the book was Town’s official photographer Dom Taylor, who spent many hours sending out appeals for the whereabouts of past players and those associated with the club.

All profits will go back in to the running football club.

For pre-orders and pricing please email Dom Taylor on dom@bridtownafc.com