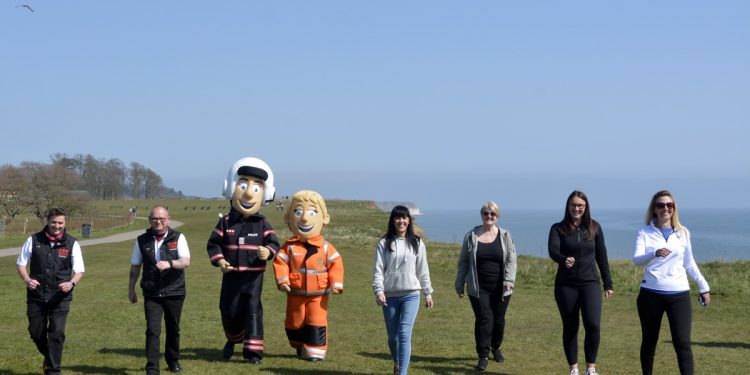 A final call for participants and sponsors has been made by a group of walkers who are raising funds and putting their best feet forward for the Yorkshire Air Ambulance (YAA).

Event organiser Tara Cummings along with the team from Bridlington Estate Agents D. Dunk, Lewis and Graves, have also been in training on the cliff tops at Sewerby for the 7.5 miles and were joined by YAA mascots Pilot Percy and Paramedic Polly to get ready for the walk.

Also joining the team will be YAA Community Fundraisers Rob Scott and Kieron Hardwick, who will be walking and helping out on the day of the walk – 29th May.

The team at Dunks have also revived the spirit of the Tour de Yorkshire by holding a sponsored static cycle event outside their office on Chapel Street in early May.

“We are also undertook a small challenge in May which we have named Tour de Chapel Street.” said Tara.

“Myself, Amanda Pannhausen, Brogan Maycock and Rebecca Lee took turns to ride the static bike between 9.30am and 12.30pm to help raise even more funds for the YAA. The morning of static cycling helped raise around £300.

As a dramatic finale to the year of fundraising Tara and Brogan will be flying high by undertaking a skydive in September – again in aid of the YAA.