Agnew delivers kick up back side to lead recovery 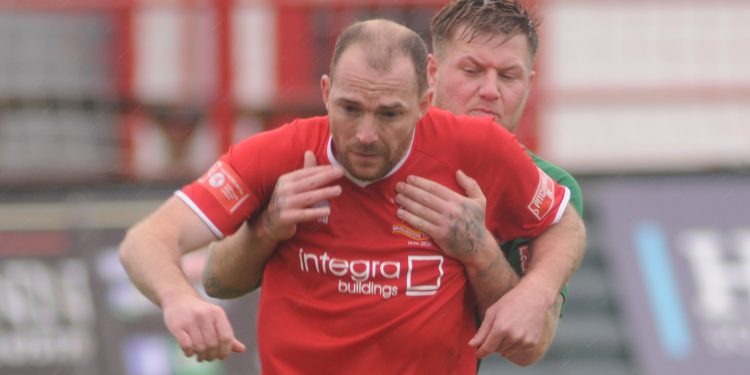 A few home truths and a ‘kick up the backside’ paid off for Bridlington Town manager Brett Agnew, reports Gordon Gillott.
Following Tuesday’s dismal performance at Pontefract, the Seasiders bounced back to come from a goal down and take a welcome three points with player-manager Agnew leading by example by scoring a hat-trick.
A delighted Agnew said: “We made changes to give people a kick up the backside,” he said. “Players can’t just expect to turn up and expect to play.
“When you’re not doing something right, you need to be dug out and that’s what we did. I said a few home truths after Tuesday that were needed and that put people on their toes.”
Harold Monkam, Leon Dawson and Danny Earl were included after being unavailable for the game at Pontefract and Agnew included himself from the start. Lewis Dennison, Declan Parker, Billy Logan and Will Annan dropped to the substitutes’ bench where they were joined by new signing from North Ferriby, Londoner Elliott Williams.
In wet and windy conditions, both sides went close with Earl having his effort saved and Andy Norfolk’s goalbound shot was blocked while at the other end Joshua Nichol headed a good chance over the bar from a corner and Jake Park’s attempt was deflected for a corner.
Town started to have the better of the game but Lincoln were dangerous on the break as it proved after 30 minutes when they broke down the left and the ball in found skipper Matthew Cotton unmarked on the edge of the Town area and he beat James Hitchcock with a well-placed strike somewhat against the run of play.
The visitors’ bar was struck as Town looked for an equaliser and it came five minutes before half-time when a ball forward found Norfolk who turned past his marker to fire past advancing goalkeeper Ross Woolley.
Three minutes later the hosts were ahead with Agnew receiving a pass from Earl and taking a touch before curling the ball beyond Woolley into the far top corner.

In time added on Nathan Hotte suffered a knock and was replaced by Parker.
Before the restart, Lewis Dennison came on for Ellis Barkworth who also had an injury from the opening half. The Seasiders were facing the swirling wind and conceded an equaliser three minutes in. A mishit through ball was picked up by Park and he was able to find a way past Hitchcock. T
own continued to have the better of the play and Earl made space to take shot but sent it over the bar.
On the hour Nichol was cautioned for a late tackle on Agnew then ten minutes later Woolley followed him into the referee’s notebook by stopping Earl’s surging run unfairly, just inside the area.
Woolley appeared to have redeemed himself by keeping out Agnew’s penalty, but the striker followed up to put his side back in front.
Earl went on anther run and evaded three attempts to pull him back only for his pass to Agnew to be intercepted.
Substitute Dennison took a return pass from Earl to get in on goal, but Woolley saved at the expense of a corner. Three minutes before the end of normal time the two combined again and Woolley, whose handling had been suspect throughout the game, fumbled the cross from Dennison and Agnew was on hand to benefit by putting the loose ball into the net for his hat-trick.
Within the five minutes added another run by Earl was halted by a timely tackle.
There was no addition to the score and the win took Town out of the relegation places and up to 16th position, ahead of Sheffield FC, Pickering Town and Tadcaster Albion.
Next up for the Seasiders is a Buildbase FA Trophy first qualifying round tie at home to Sheffield FC on Saturday.
Bridlington Town: Hitchcock, Barkworth (Dennison 46), Lewis, Davidson (c), Hotte (Parker 45+2), Monkam (Annan 58), Dawson, Dixon, Agnew, Earl, Norfolk. Unused substitutes: Logan, Williams.
Referee: Ian Johnston.
Attendance: 176.