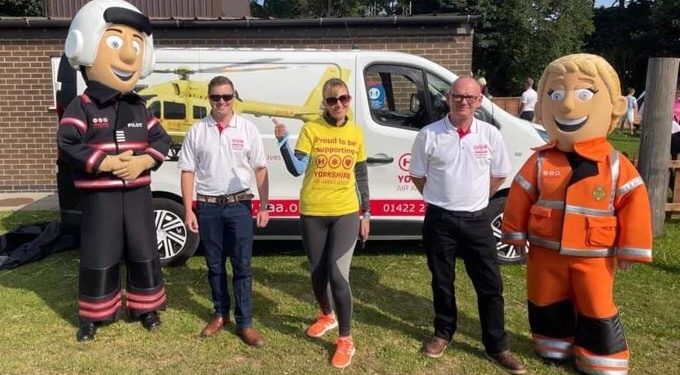 An intrepid Bridlington estate agent has completed a 10,000ft skydive and helped to raise thousands of pounds for the Yorkshire Air Ambulance charity.

Tara Cummings, who is the manager at D.Dunk Lewis & Graves on Chapel Street, has along with her work colleagues, been raising funds for the YAA for the past nine months after selecting the life-saving organisation as the businesses charity of the year.

“We have been raising money all year for the Yorkshire Air Ambulance and the final charity event was held last Saturday (18 September) at the Skydive GB Parachute Centre at Grindale, near Bridlington.” explained Tara.

Tara’s instructor Alec Flint  took great care of her whilst jumping out of the plane at 10,0000 feet after a morning of safety briefings and instruction.

Tara thanked the Yorkshire Air Ambulance for all their support in particular local representatives Rob Scott and Kieron Hardwick who have attended all four fundraising events over the year.  They have included organising and taking part in an eight-mile sponsored walk and two static cycle ride challenges.

Said Rob: “It has been a pleasure working with all the team at D Dunk Lewis & Graves andthe YAA would like to thank them for all their support and look forward to fundraising with them again in 2022. Let’s see what daring events they come up with.”

“Tara is hoping to undertake a Wing Walk so we are trying to arrange this for her.”added Rob.

There is still time to donate to the YAA via Dunks Facebook page (JustGiving link), or call into the office on Chapel Street.